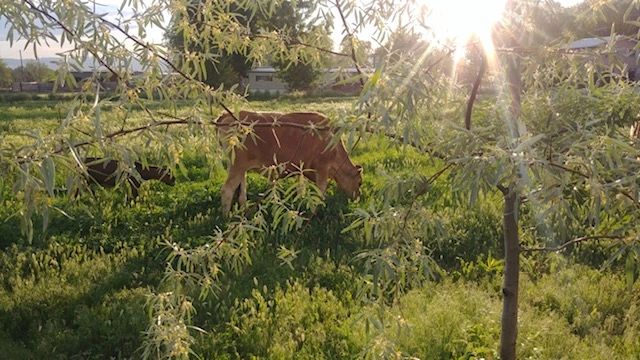 We got into the business of raising our own cattle because we are kind of picky about the quality of meat we put in our freezers as well as our bodies. When we raise our jersey cows from the time they are baby calves until processing, we can control the feed and chemicals they consume.

Having been raised on a Jersey dairy farm, I am pretty set in the type of livestock and meat I am interested in raising. I have a friend with connections at a local dairy close to Caldwell, and for the past three years have been able to obtain bottle calves in July. The first year we got four bull calves to raise as steers for meat. The next two years we have only been able to get female calves because technology has made it possible to control the sex of calves before they are born. Thus eight heifers later, our potential breeding herd was formed.

It takes a minimum of two years growth to get a Jersey cow to butcher weight.  Our first four heifers were gaining weight, when Sue said she would sure like to have some Scottish Longhorn cattle because they have curly hair!  After doing a little checking we found these highland cows to be small calves when born and a smaller stature as they mature, so they should cross with the Jerseys without any problems and provide quality meat.

We found a bull in Colorado named J bar T Iron MIke,  and bred Daisy and Red, two of our Jersey cows to him last November. We are looking forward to a couple baby highland calves with curly hair to show up around the 10th of August. We still have some of Iron Mike's semen in the nitrogen tank and a couple more heifers that we are considering to add to our breeding herd. Eventually we will be tasting Jersey/Highland beef in Caldwell!

Enjoy some pictures of our livestock